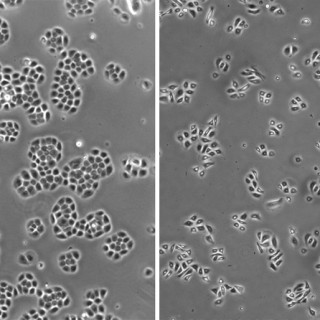 Changes in the phenotype of keratinocytes is often accompanied by significant changes in the adhesion and migration of these cells.

For example, the most early stage progenitor cells tend to express a range of strong adherence proteins, including the integrins. These proteins provide strong attachment to the underlying surface, resulting in limited migration and dense colonies.

Migration is most commonly evaluated either via a colony forming assay, or alternatively via a scratch assay which evaluates the speed with which cells re-colonize a stripped section of the culture flask.

> Back to Standard Tests: Epidermis